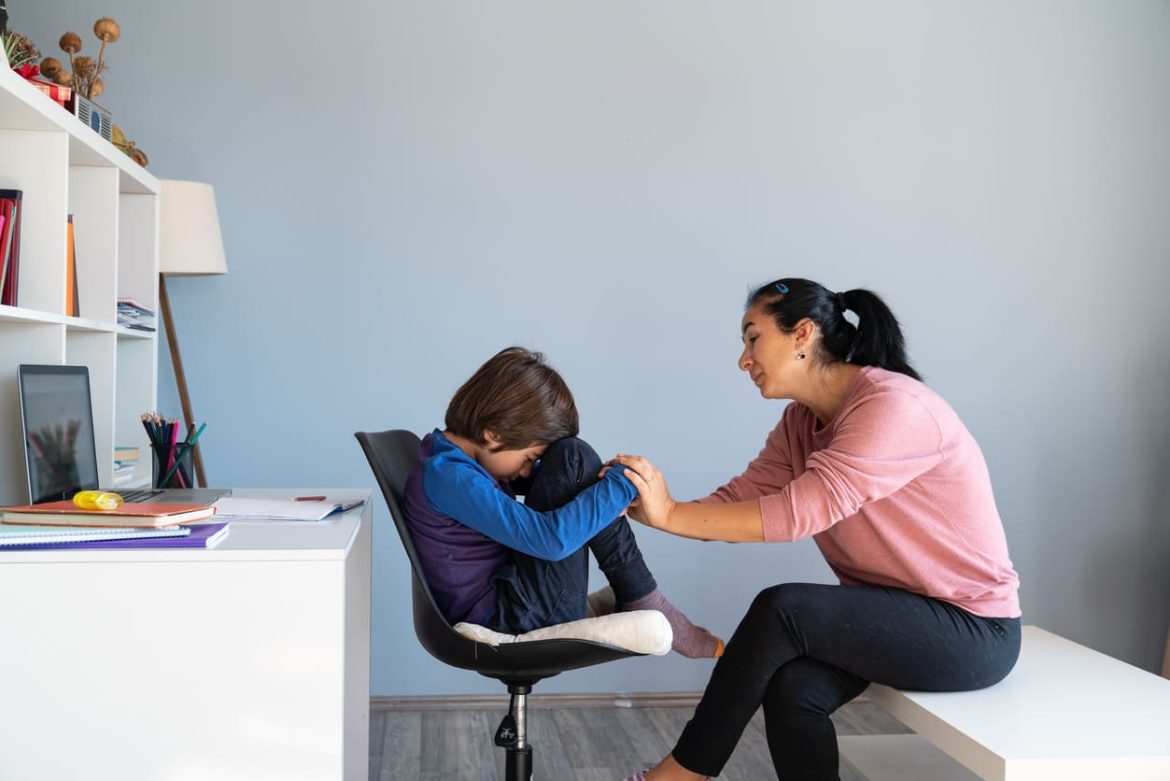 All children have bad moods, anxiety, sudden sadness or even tantrums from time to time, which worries their parents a lot. But in most cases, such states do not have anything wrong with them and are just part of normal development. Even if a child does not want to play or go to school, it does not necessarily mean there is a psychological problem.

But if such cases are becoming more frequent, and the exception becomes more of a rule, parents and caregivers should pay close attention. Take a closer look: Are negative experiences affecting the child's daily life? Does he or she suffer from it?

By recognizing problematic phenomena at an early stage, parents, educators or caregivers can counteract the development of mental health problems in children or the exacerbation of existing mental disorders.

Before taking any more serious steps, parents can try to identify the problem themselves by asking themselves the following questions:

How long has my child been different?

Often the restless behavior disappears on its own after a few days. It may indicate a serious problem if the condition persists for many days or even weeks.

Have you noticed this change before?

Some problems occur in stages. Sometimes the problem appears, then disappears, but reappears after a while. If problematic phases recur over and over again, it may indicate not just a bad mood, but depression that requires treatment.

How often does the disorder occur?

For an initial assessment of a problem, it can be helpful if you can be relatively precise about how often the problem occurs. Sometimes it is helpful to keep a calendar in which the phases are recorded.

How serious is the problem?

When rating the intensity of the disorder, it is not an objective classification, but your personal opinion or that of your children. You can rank the problem on a scale of 1 to 10, for example, where 1 corresponds to the minor and 10 to the maximum impact of the problem.

Does the problem cause distress to you or your child?

Violations can be very stressful for you as well as your child, especially if no one wants anything to do with you for that reason.

Sometimes disturbances manifest themselves depending on the situation. Under certain circumstances, the problem can be eliminated simply by temporarily avoiding such stressful situations.

If your child's other caregivers, such as grandparents and kindergarten teachers also notice changes in your child and show concern, you should listen to what they have to say. You are no longer alone with your concerns and can exchange ideas with them about what to do next.

Do you think you or your child can solve the problem on your own or do you/your child need help?

Parents often take too long to try to solve a problem with their child on their own before seeking support. You should not wait too long to ask for help.

A child psychotherapist will make an accurate diagnosis and suggest the appropriate therapy, if it is appropriate for your child. Or will give advice on how you can deal with the problem yourself.

Mental illness in children and adolescents should be treated as early as possible. In this case there is a good chance of stopping their further development and thus preventing the transition to adulthood.

Before treatment begins, the specialist must determine the exact type of disorder. This is important for the success of subsequent therapy.

In the first step, the specialist will have a detailed conversation with you and your child to gather your medical history. For example, the following information is important:

With your consent, the doctor may also talk to relatives, teachers, or caregivers to get as much insight into your child as possible.

As a next step, the specialist may recommend behavioral observation. He or she can then ask you, for example, to observe and record how your child eats or plays during a certain period of time.

A wide variety of illnesses can be behind mental disorders in children. In principle, children and adolescents can develop the same mental illnesses as adults, such as depression, anxiety and eating disorders, which are among the most common. In contrast, psychiatric illnesses, such as schizophrenia, rarely manifest in childhood, and mostly develop later (in young adulthood).

In addition to these age-independent illnesses, there are mental disorders that always develop in childhood, "childhood mental illnesses" so to speak. They often remain present into adulthood.

Here are a few mental illnesses in children that are most common and require mandatory treatment:

Constant sadness, lack of drive and interest, and social isolation can be signs of depression. Even young children can develop a depressive disorder.

Anxiety disorders are also common in children and adolescents. These include phobias, panic disorder and generalized anxiety disorder.

At one moment, joy can be replaced by deep sadness: people with bipolar disorder constantly fluctuate emotionally between extremes.

Personality disorders are serious mental illnesses. It is characterized by impulsiveness and instability - feelings, thoughts and attitudes can change within a very short time.

This form of mental disorder manifests itself as compulsive, ritualized behavior or thinking.

Attention deficit/hyperactivity disorder (ADHD) is considered genetic. Typical features are inattention, hyperactivity and impulsivity, which are excessive in relation to the developmental level of those affected and appear in all situations.

Oppositional behavior disorder manifests itself primarily in aggressive behavior toward authority figures such as parents and teachers. Affected children are prone to outbursts of anger, defiance of adults, refusal to follow rules, and an ease of provoking and annoying others - behavior that used to fall under the general term "difficult children. The symptoms are a problem for parents, teachers, and caregivers.

Social behavior disorder can have more serious consequences. Unlike oppositional defiant disorder, affected children violate the rights of others or age-appropriate rules and norms by their behavior. Typical symptoms are a lack of empathy, that is, an inability to empathize with others, and a high degree of aggression.

Once the diagnosis is made, the question of optimal treatment arises. Mental illness in children is often treated with a combination of psychotherapeutic measures, educational and social approaches and, if necessary, medication therapy.

Before treatment begins, the question arises as to whether the young patient should be treated as an outpatient, inpatient or semi-inpatient. The decision depends on the type and, in particular, the severity of the mental disorder. Sometimes weekly outpatient therapy sessions are sufficient; in other cases, treatment in a child and adolescent psychiatric clinic is indicated. The decision is made by the treating specialist together with the parents.

How can you help your child?

The best way to help your child is to accept and appreciate him for who he is. Actively support him:

If you, as a parent, suspect your child has a mental illness, you should not become desperate. You should monitor your child carefully and if his behavior continues to cause concern, seek help from specialists who will make an accurate diagnosis and prescribe a targeted and effective therapy. Many childhood mental illnesses are treatable and, with the right approach, do not progress to adulthood.