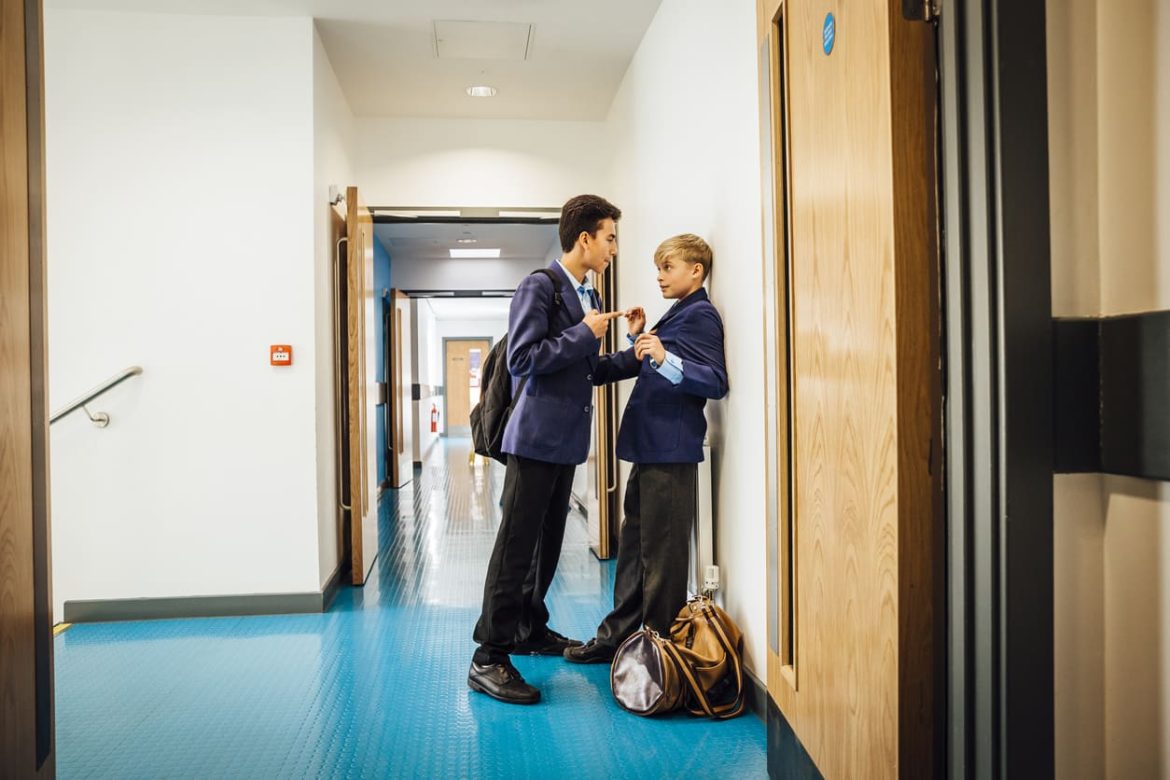 Unfortunately, school bullying is not uncommon in today's world. The psychological consequences of bullying can be very, very serious. But parents usually feel helpless and do not know how best to support their child when he or she is bullied by other students. Therefore, it is very important that parents know as much as possible about this topic.

Bullying comes in many different forms and is often not even recognized as such. First of all, experts distinguish between verbal bullying, such as teasing, threats or taunting, and physical bullying, such as pushing, pinching or hitting. These two forms are also referred to as direct bullying.

There is also so-called indirect bullying, which involves the exclusion of individuals from a certain social group (for example, a certain child is not wanted to be included in the game) or damage to reputation.

The reasons for bullying are complex: often bullies have been bullied or abused themselves and now compensate for their powerlessness by bullying or humiliating others. There is no such thing as a typical victim of bullying.

Anything can be a trigger: physical disability, pimples, clumsiness in gym class. One classmate laughs and bullies, another joins in. Gradually, even those who were once close to the child can distance themselves from him.

How do you know if a child is a victim of bullying at school?

In order to recognize if your child is being bullied, you should pay attention to the following warning signs (they do not apply to everyone to the same degree, but appear in different forms).

What should parents do?

If your child tells you that he has been bullied, take it seriously. Listen to him first and don't interrupt.

It is incredibly hard for parents to hear that their child has been bullied. There is a desire to immediately deal with the bully directly. However, it is desirable to remain calm and not lose self-control.

The most important thing is for your child to know that it is not his fault. You should also let him know how great you think it is that he trusted you with his problem. After all, this is not an easy step for many people. A good parent-child relationship is really worth its weight in gold here.

What can also be helpful is to look together for an answer to the question of why the initiator of bullying is not getting along with your daughter or son. When your child understands why classmates bully him or her, he or she will better understand that it is not his or her fault. Bullies can copy the behavior of siblings or parents and know no better.

Notify the school. If there is a strong suspicion of bullying or if it is confirmed, it is important to contact the school so they can respond early and take the necessary steps to put a stop to it.

Tip: As a rule, it is not advisable to immediately press charges against the parents of the abusers or the abusers themselves. Parents often do not want to admit that their children have a negative side. In addition, your child's situation may be further weakened. If the situation still hasn't improved after a few weeks or months, don't hesitate to contact school authorities. It is advisable and helpful to gather evidence. For example, if the abusers destroyed your child's belongings, it can be documented with photographs. Take screenshots of social media posts if your child is being bullied online.

However, if it comes to the point where your child is being physically abused, sometimes it can be helpful and even necessary to go to the police.

What can the child do?

Of course, bullying necessarily requires adult intervention. But there is something the child himself can do to counter bullying. Discuss with him or her the possible methods and find the most appropriate one.

Here are a few examples of what might help:

However, if bullying attacks are very numerous and your child has already developed an "outsider position" in the classroom, these strategies that your child can use on their own are only an additional method. In severe cases, victims of bullying can barely defend themselves without making the situation worse. They depend on outside help and, therefore, on your direct initiative as a parent.

If the situation gets out of control and does not improve even after parents and teachers have been involved, and the child feels depressed and unable to change anything, you should seek help from a child psychotherapist. He will help work through the situation and prescribe therapy to deal with the effects of bullying.

If your child is the instigator of bullying?

Do you suspect that your child is bullying other students? Then the same applies to you as to the parents of possible victims: try talking to the school. Your child needs to know that you are communicating with the teachers. You must also make it clear that you will not tolerate bullying. And you must find out what is causing your child's behavior and help them change their behavior.

The tips mentioned above can certainly help, but unfortunately, bullying often continues even after active counteraction.

If your child has been victimized, you absolutely need to act, not just watch. Always listen to him, take what he says seriously, and preferably talk to friends, other parents, teachers and, if necessary, a psychologist. If nothing at all helps, you should definitely think about changing schools.

And lastly, a few more tips that may help:

What should I do if my child is hiding the fact that he is being bullied at school?

In this case it makes sense to talk frankly and with great sensitivity with the child. It is often difficult to start a conversation. Bullying is full of anger and shame. Learn to listen. Also, under no circumstances should parents blame the child for what happened to them. In this case, there is a good chance that the child will confide in you.

What shouldn't you do?

Online consultation psychologist: how does it work?